Unfortunately our featured match between Cooke and Suttonians was postponed due to a frozen pitch. Of the remaining three matches we got two pretty much bang on and one completely wrong in our predictions.

The results from Week 9 are as follows.

Galwegians were the team to buck the predictions, recording a 19 – 10 win, against Old Belvedere, to move off the bottom of the table. The Bluebirds are replaced by Malone who battled to a 7 – all draw against Blackrock at half time before going down to a second half onslaught from their hosts.

In the top of the table clash UL Bohemian held on, in a close game against Railway,  though the visitors did pick up a losing bonus and a try bonus.

This leaves the table as below. 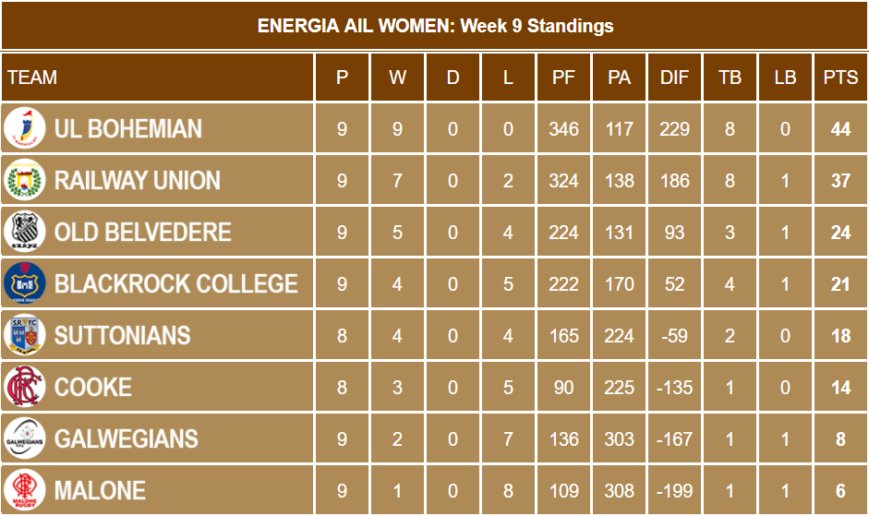 With five games to go, or six in the case of Cooke and Suttonians, it’s looking like Bohs and Railway have pretty much nailed down the top two spots with Belvo, Rock, Sutts and Cooke all vying for third and fourth place. Realistically, Cooke would need to win their postponed game against Suttonians if they are going to stay in the hunt.

Hopefully the catch up game will be completed before the next round and with both the Ulster clubs at home for that one it should be quite the love in on The FRU the day after Valentine’s day! Big dilemma for me, will I be wearing by UL Bohemian bobble hat or my new Suttonians one. lol

We’ll do a full preview of the Week 10 games during that week.

There were 131 points scored in the three games played in Week 9. The points came from 21 tries and 13 conversions giving a conversion rate of 62% which is the highest this season.

Fitzgerald’s haul moves her up to 4th in the Leading Scorers Table with Nicole Fowley (Galwegians) and Steph Carroll (Railway Union) also moving up a couple of places.

Carroll is the big mover in the Leading Try Scorer Table, moving up to second place on her own, and Fiona Reidy (UL Bohemian) joins three other players on 6 tries. 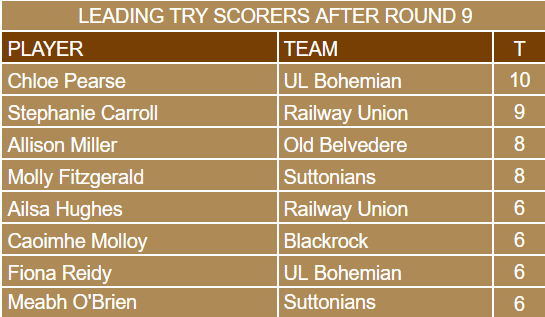 There are four new nominations this week with Orla Dixon, Peita McAlister, Jenny Murphy and Larissa Muldoon all getting their first nominations of the season.

Chloe Pearse moves to the top of the Player’s Player Table and Caomie Molloy joins Alison Miller and Neve Jones in second place.