Suttonians have had an impressive first half of the season. Will it continue in the second half?
2019-20

By Editor on January 10, 2020 0 Comments
Suttonians have had an impressive first half of the season. Will it continue in the second half?
CLUB WOMEN ADVERTS
JOIN US

The Women’s AIL also returns this weekend as they kick start the second half of their season.

With only eight sides in the Women’s league there are only seven regular match weekends left which stretch into April. The league is being expanded and possibly re-branded next season with Ballincollig and Wicklow joining the existing teams, details below.

Following a comprehensive selection process, 10 teams will be invited to take part in Irish Rugby’s premier club rugby competition for women next year.

The eight teams that are currently in the Energia Women’s All-Ireland League will be joined by two teams competing at that level for the first time – Ballincollig RFC and Wicklow RFC.

Five of the remaining weekends will be affected by the  Women’s Six Nations with international camps and match weekends scheduled through to 14th March.

The Ireland Women’s Six Nations Squad was announced over the holiday period and you can view the players likely to be involved in the drop-down below.

The match schedule is as follows.

The plan is that the players should be available for the final two weekends of the league plus the play offs which are scheduled for the weekends of the 18th and 25th April.

Getting back to our preview, the matches for Week 8 are the reverse of the fixtures for Week 7, as follows.

As with the men’s AIL 1A and AIL 1B we’ve been keeping the statistics for the women’s AIL and you can remind yourself on who’s been doing what over the first half of the season here.

We’ve also been monitoring the weekly match point pick up for the teams throughout the season to give an indicator of form, and we’ll be using this information for our predictions. 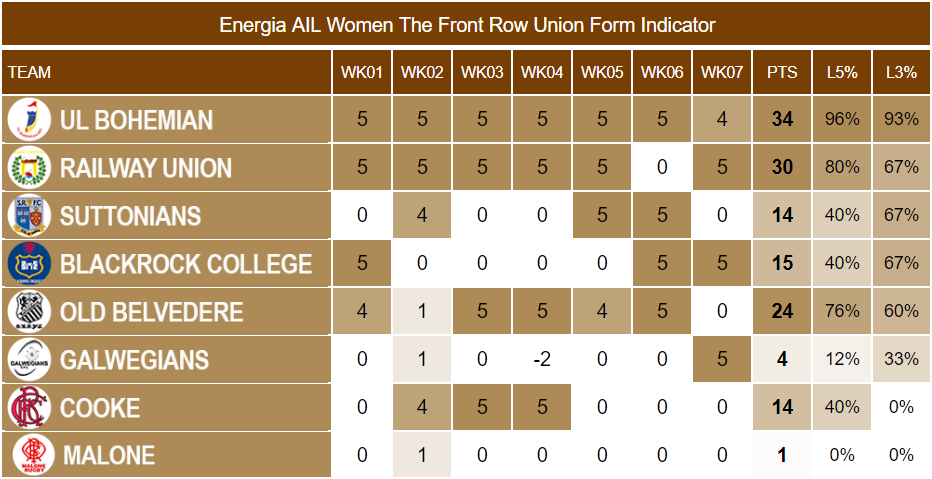 How the form indicator works

We track the match points picked up by each team for each game.

Match points are awarded as follows.

We then sort the teams in order of their L3% and then L5%.

The league has been dominated by UL Bohemian who only dropped one match point over the first half of the season. They are closely followed by Railway Union who have only lost one game.  Old Belvedere are next in the top three with two losses and there is some distance between them and the next group of Blackrock College, Suttonians and Cooke who are all vying for that other play off place.

The bottom two sides meet on Saturday at Gibson Park with Malone still looking for their first win, and revenge, following their 29 – 12 defeat by Galwegians last time out.

The Connacht side will be favourites going into the game, by virtue of that win, but the Belfast side will have been targeting this game for a few weeks now. The visitors will have a couple of players involved with the Ireland squad but they will still have experienced players available so Malone will need to show some improvement from their last outing .

The desire for that first win in the senior league may be enough to push Malone over the line but the stats point to Galwegians heading back to Connacht with the points in the bag.

Old Belvedere are the only side to deny the mighty UL Bohemian a full match point haul this season, restricting them to “only” three tries in Boh’s 19 – 0 win last time out. Will Belvo be able to go one better this weekend?

Probably not! Boh’s have been sweeping all before them this season by virtue of their magnificent, and free scoring, pack and, with only one player from the mean red machine called up to the Ireland panel, it’s unlikely that their dominance is going to be derailed anytime soon.

The D4 Duchesses are losing up to five of their front line forwards to the Ireland squad, making their task even tougher.  While they still have some of our favourite backs available, in Miller, Jackson and Tuite, it’s unlikely that they’ll get many opportunities with Boh’s likely to wrap up possession and continue their undefeated march through the season.

Despite the clear disparity in the stats, and the 0 – 52 win for Railway at Shaw’s Bridge in Round 7, Cooke should be looking at this game as an opportunity.

Railway will be missing up to 10 of their front line players to the Ireland XV squad and with another half dozen perpetually involved with the Ireland 7s the defending champions are going to have their resources  stretched over the next couple of months.

Although Cooke won’t be losing any players to Ireland they already have a fairly small squad and their season has been in fits and starts depending on availability. If they can get all their front liners out for their trip to Dublin they have a chance but Railway will still go into the game as clear favourites.

League newcomers Suttonians should fancy their chances of reversing their 36 – 7 defeat to Blackrock College last time out.

The TRIBE have made an impressive start to their senior league campaign and I was somewhat surprised by the scale of that defeat in Week 7. However, this is a season for development and they have shown that they learn quickly.

Blackrock were enjoying a mini revival just before the league parked itself in December but with four of their players called into the Ireland squad their young side may struggle over the coming months. In particular, leading scorer Hannah O’Connor is a big loss.

The stats have this one at even but we’re going to go with a win for Suttonians.