Old Wesley come out on top against Banbridge in the opening round of Energia AIL 1B at energia Park on Saturday afternoon.
Club Men

By Editor on December 6, 2019 0 Comments
Old Wesley come out on top against Banbridge in the opening round of Energia AIL 1B at energia Park on Saturday afternoon.
CLUB MEN ADVERTS

It’s been a couple of weeks since our last wrap. We have a look at the progress of the Ulster sides after they returned to action in the AIL 1B last weekend.

It was wins for Banbridge and Malone but City of Armagh’s poor run of form continued with defeat by, table toppers, Highfield at Woodleigh Park.

The Orchard County side can take some comfort from the fact that it was a close game though they will be disappointed that they missed out on a match point by a point on the scoreboard.

Old Wesley continued to keep up the pressure on the undefeated Highfield as they continue to finish the right side of the score line in close games, this time against Shannon.

St Mary’s continue their upward charge, winning their third match on the bounce to move into 4th place after picking up four points at Naas. 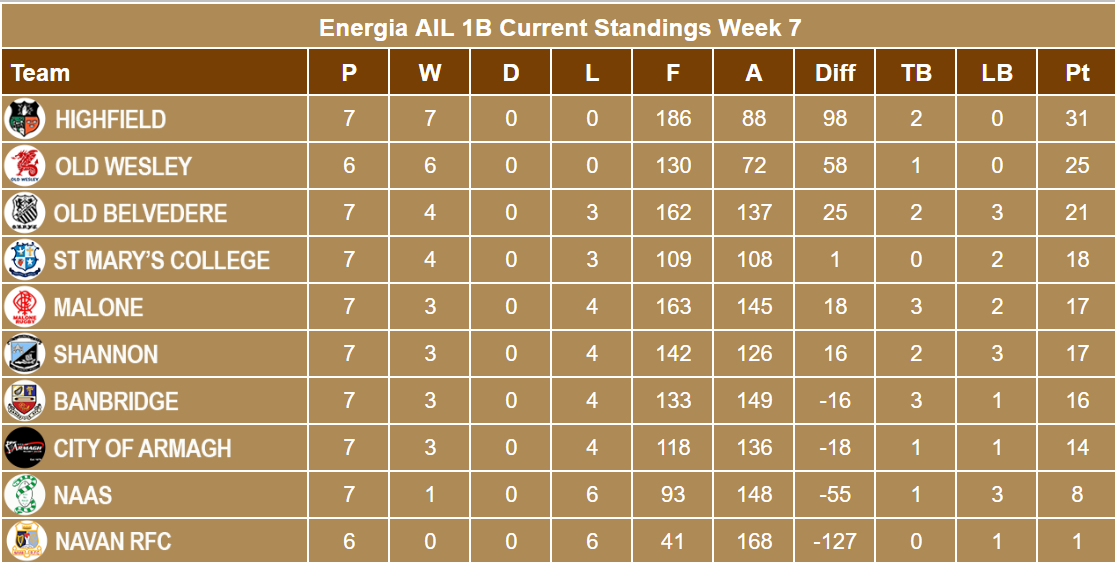 Unfortunately, at the bottom of the table Navan continue to look for their first win after coming up against a fully stocked Malone back line which featured the future Ulster centre pairing of Stewart Moore and Angus Curtis.

There were 205 points scored in AIL 1B this weekend, the points coming from 24 tries, 17 conversions (71% conversion rate) and 17 penalties.

Old Wesley’s Rory Stynes was this weeks leading scorer with 14 points from 3 penalties and a conversion. City of Armagh’s Cormac Fox was the second highest scorer after accounting for all his teams 13 points through a self converted try and two penalties.

Old Belvedere’s Steve Crosbie maintained his 20 point lead at the top of the table with 12 point haul from 3 conversions and 2 penalties and Shane O’Riordan (Highfield) holds on to third place with 11 points from 3 penalties and a conversion.

Malone duo Stuart Moore and Matthew Dalton both got into double figures with 10 points from two tries apiece as did Marcus Walsh (Old Belvedere) who bagged his brace at Rifle Park.

All the activity leaves the leading scorers table as follows. 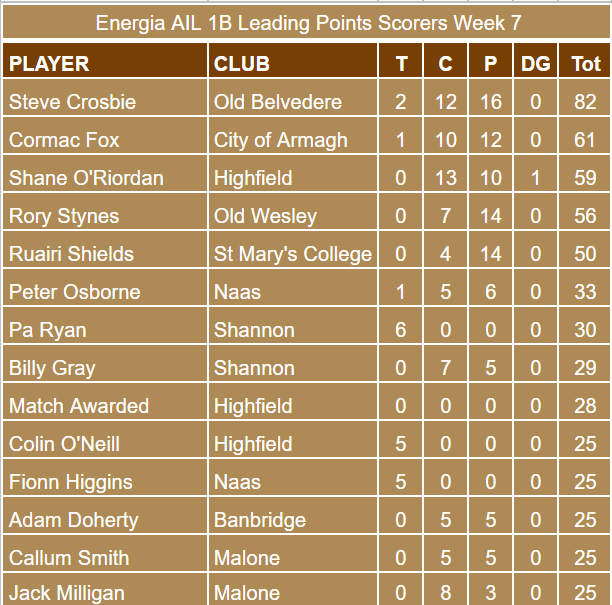 With regards to the leading try scorers PA Ryan (Shannon) continues to lead the way with  6 tries, Colin O’Neill (Highfield) and Fionn Higgins (Naas) hot on his heels with 5 tries each.

The fixtures this coming weekend are as follows.

The current form for the teams taking part, based on their last 3 and 5 matches, is as follows. 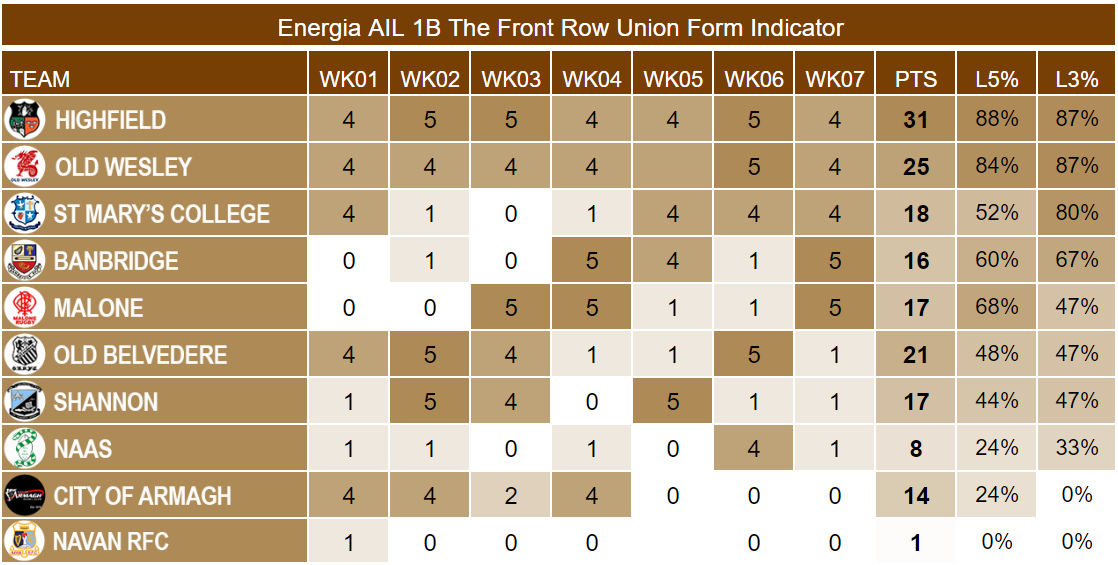 Despite there only being one point between these side in the league, the current form stats point towards a comfortable win for a resurgent St Mary’s who have won three in a row after an early season stumble.

Shannon, on the other hand, appear to have gone off the boil after a fairly strong start with only one win from their last three.

So we are going to stick with the stats and put our money on St Mary’s grinding out a win.

The match of the round sees the leagues top two go head to head with both sides undefeated records up for grabs.

As you would expect there isn’t much in the stats, both are equal on current form but Highfield have picked up one more point over the last five games. However, one of those games was a walkover against Navan with Highfield awarded 5 match points and 28 points in the points scored column.

Wesley’s game against Navan was postponed, over the same period, but you would have expected them to pick up something similar. If we look at the last 3 and 5 games actually played then Old Wesley are marginally ahead of Highfield on the last 3 and equal on the last 5.

Highfield have certainly set a remarkable standard since joining the league from 2A this season but we are going with old Wesley in this one with the home side just inching ahead in a tight game.

City of Armagh have hit something of a slump since setting the standard for the Ulster clubs over the opening rounds, their recent poor run of form has allowed Malone and Banbridge overtake them in the league.

However, in Armagh’s case, it may just be down to timing with 2 of those three losses being against the top two sides.

Malone’s main problem has been in fielding a settled side, as they draw heavily from the Ulster Academy, and it’s been a disjointed season. While there is no doubting the quality of the players they have at their disposal there is also a need for continuity and they have struggled for this in a couple of games.

While Armagh are exactly the sort of grounded, hard working, side that could upset the Belfast team, particularly with home advantage, I’m going to stick with a Malone win.

Navan have struggled this season having won promotion via the play offs.

Banbridge are on a reasonable run, picking up 2/3 of their available points over the last 3 and are just a few points short of this rate over the last five.

It’s hard to look past the league standings in this one which should see a win for the Bann.

This will be an interesting test of the stats.

Old Belvedere are the favourites by virtue of picking up a couple of extra bonus points over the last three games and over the season as a whole they have battled their way up to 3rd place.

However, on current form, both sides have only picked up one win in the last 3 games.

To supplement the stats Belvo are undefeated at home and Naas have yet to win on the road.

I’m not seeing anything to buck these trends so we’ll stick with Belvo for the win.