You are at:Home»Club»Club Men»Energia AIL 1A. Who’s been doing what?

Young Munster start to power their way up the league.
Club Men

Energia AIL 1A. Who’s been doing what?

By Editor on December 19, 2019 0 Comments
Young Munster start to power their way up the league.
CLUB MEN ADVERTS

With the Energia AIL 1A being parked until 11th January, we have a look at who has been doing what in the first half of the season. in this competition.

It’s good news for our friends in Munster as teams from Cork and Limerick have dominated proceedings in AIL 1A, AIL 1B and the Women’s AIL with Cork Constitution unbeaten in 1A, Highfield at the top of 1B and UL Bohemian undefeated in all competitions in the Women’s.

Energia AIL 1A Results and Standings.

We’ve two weeks of results to catch up with in this competition.

The results from the last two rounds are shown below. 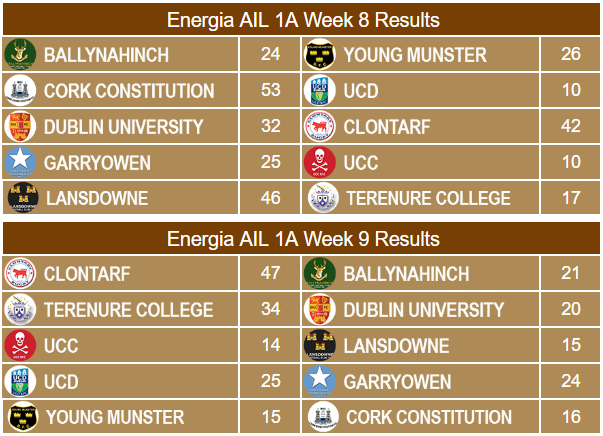 Cork Con remain undefeated and have put some distance between themselves and the rest but, near neighbours, UCC have continued their dramatic slide down the table after losing the last six games on the trot.

Unfortunately our friends at Ballynahinch remain rooted to the bottom of the table though any of the teams in the bottom three could rise to the heady heights of midfield safety if they could string a short run of wins together, as Lansdowne and Clontarf have shown in recent weeks.

Unsurprisingly Cork Constitution remain the form team in the league and, if anything, they have upped their game over the last three rounds picking up 93% of the available points compared to a season average of 87%.

It’s been a dramatic change for Lansdowne who are now in second place on recent form after shaking off a run of five games without a win by winning the last three.

At the bottom of the table UCC have the most cause for concern after going on a run of six games without a win though Dublin University will also be worried having gone the last five without that big W on their side of the scoreboard.

Hinch will also be disappointed they didn’t build on their five pointers in Weeks 5 and 6, the Ulster side losing the last three.

We’ll have a closer look at the form table when we do our Week 10 Preview in January!

There were 516 points scored over the two weekends with the points coming from 74 tries, 43 conversions (58% conversion rate) and 20 penalties.

Week 8 was actually the highest scoring weekend of the first half of the season with a massive 41 tries helping to push that individual week total to 285 points.

The lead scorer over the two weekends was UCD’s Ronan Foley who bagged 20 points from 4 tries. Next up was Clontarf’s Sean Kearns who recorded 17 points from 1 try and 6 conversions.

There are four players are on 15 points. Ross Adair (Ballynahinch) did it the easy way with 3 tries while Gearoid Lyons (Clontarf) and James Fennelly (Dublin University) each knocked over 3 conversions and 3 penalties and  Sean O’Hagan (Ballynahinch) hit his 15 through 1 try and 5 conversions.

All this leaves the leading scorers table as follows: 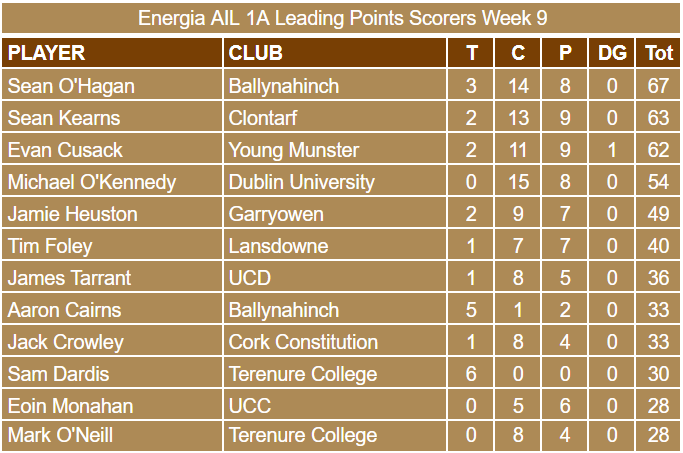 Sean O’Hagan holds on to the lead at the half way point while Clontarf’s improvement in form sees Kearns come into the top three in place of Dublin University’s Michael O’Kennedy who has been absent from the team sheet the last two weekends. 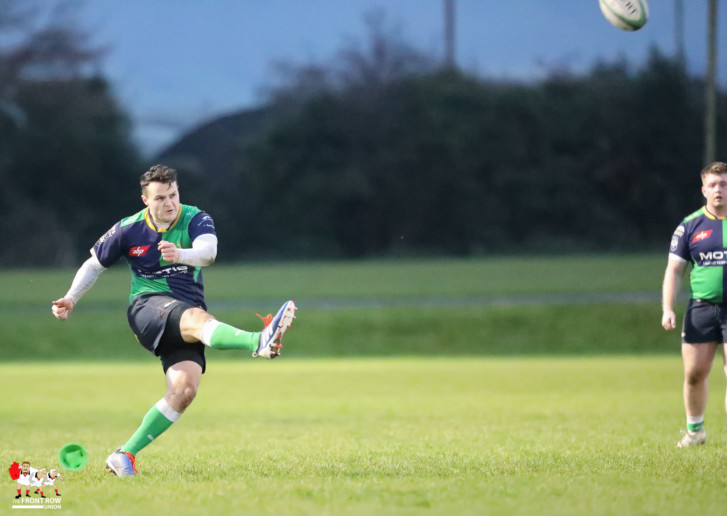 Sean O’Hagan continues to knock over the points despite Hinch’s indifferent form.

We’ve broken out the leading try scorers on their own as we prepare to go into the second half of the season. 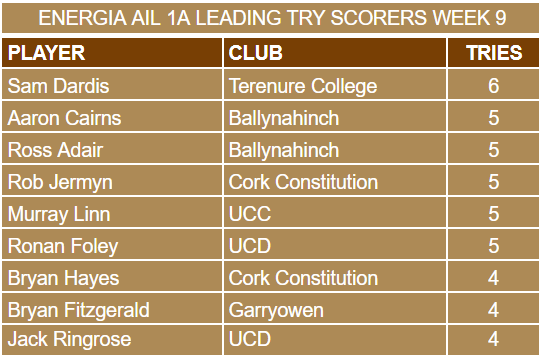 You can view the individual scorers for each club below.