Railway Union and UL Bohemian go head to head in their traditional top of the table clash!
2019-20

By Editor on November 29, 2019 0 Comments
Railway Union and UL Bohemian go head to head in their traditional top of the table clash!
CLUB WOMEN ADVERTS

Week 6 of the Women’s AIL throws up an interesting set of fixtures the most noticeable being the meeting of the top two sides, UL Bohemian and Railway Union, both with 100% records on the line.

However, there is plenty of interest outside of the top two tussle as the rest of the sides look to hit their own targets.

Malone will be looking to get their first win when they welcome Blackrock College to Gibson Park.

Galwegians will be hoping to kick start their season with a repeat of last seasons win against Old Belvedere at Ollie Campbell Park.

Suttonians will be pushing to complete a home grand slam against the Ulster teams at Station Road.

We’ve bench-marked the teams on their points pick up over their last 5 matches (L5%) and their last 3 matches (L3%) and sorted the teams by their last 3 results to determine who is on the hottest run. We’ll be using the L3% figure as an indication of what team is most likely to win based on current form.

At this stage of the season it’s no different than the league standings but it will start to shake up once a team in the bottom half starts to put together a run.

Note – it’s slightly skewed at the minute due to the walkover awarded to Cooke against Galwegians in Week 4. 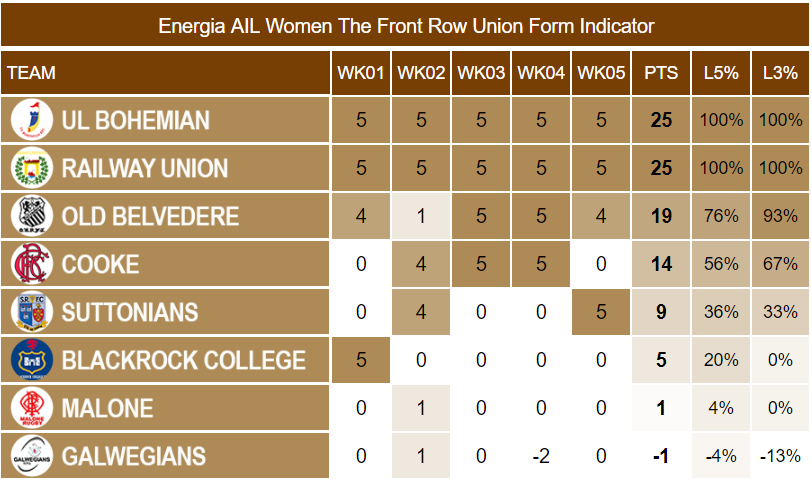 Both sides will be looking at this game as an opportunity for a win and with neither side picking up a match point over the last three games they won’t be short of motivation.

Malone will be satisfied with the start to their first season in the AIL. Apart from a large opening day defeat, to league leaders, UL Bohemian they have been competitive for substantial periods of their games but they haven’t been racking up enough points and they have the lowest points for total in the league, which doesn’t sit well with the highest points against total.

Their young pack have struggled to dominate their opponents but in my view their progression has been ahead of the curve and their exciting back line is going to have a strong base to work off in years to come if they continue to tighten up.

Malone coach Grace Davitt is also looking for more work in defence as she prepares to face one of her old sides.

We are excited to face Blackrock but we know they are going to be a tough team physically.

We are continuing to build our confidence in this league but want to improve defensively and make Blackrock work hard.

Blackrock will be keen to bounce back after a poor run of form following their big opening day win against Galwegians.

With a new management team in place, they have perhaps struggled more than other sides with the loss of players to the international panels.

However, they should have their five top scorers, Hannah O’Connor, Caoimhe Molloy, Mairaid Holohan, Michelle Claffey and Netasja Behan, available for this one, along with Judy Bobbett who featured strongly in the interpros.

It’s been a positive week training at Stradbrook. We’re looking to right some wrongs and bounce back from the last few disappointing results.

Where we have been happy with some aspects of our play of late, this week has been about making those all important tweaks to help us ensure we are on the right side of the scoreboard come full time.

There is nothing between the sides according to the stats and Malone will be boosted by a vocal home support, the game being part of an AIL double header at Gibson Park.

I’ll be at this one with my camera and I’m particularly looking forward to the clash between the underrated Lauren Maginnes and the, at long last, capped Hannah O’Connor, as two classic (and classy) No. 8’s go head to head.

As for the result, it’s a formidable Blackrock pack and I suspect it will be enough to see them through in a tight game.

The stats indicate a comfortable win for Old Belvedere, however if any team can buck the trend it’s a Galwegians’ side out to make a point.

The home side’s coaching team are certainly aware of that threat with Nora Stapleton telling the FRU.

Galwegians may have looked to be struggling with numbers and results recently but we’re very aware of the quality of players they have. Laura Feely is a strong scrummager and ball carrier, and Nicole Fowley is playing well. They had a strong performance against Railway last week and one which they’ll probably want to build on, so we need to be ready for that threat.

We’re enjoying mixing in some of our internationals to the starting team, alongside other established players such as Elise O’Byrne White, Aine Donnelly, Jemma Jackson and Clodagh Dunne. We’re really happy though with how the likes of Alannah Rogers, Jan Carroll and Emma Lackey are putting pressure on us as coaches in terms of team selection due to their outstanding performances this season.

As for Galwegians, they seem to have too many classy players to be in the situation they are in, but, they haven’t been able to get enough onto the paddock in any of their games.

I suspect the visitors will need all their big players for this one if they are to see off the challenge from Belvo with the home team determined to position themselves for a charge into the top 2.

As you would expect there isn’t much between these two undefeated teams in the stats. The only significant difference is that Bohs have scored almost 60 more points over the five games and those points have come from an extra two tries per game.

It’s been a rebuilding season for Railway, they have brought in quite a few new names and it’s testament to their coaching team that it’s been a fairly seamless transition. As always, they have an exciting back line, which will be featuring Ulster U18 starlet Amanda McQuade, but their pack has also weighed in with just under 50% of their 32 tries.

The Limerick Mean Machine have clocked up an astounding 43 tries over their first five games, with over 60% coming from their formidable pack. They have also developed their young talent who have contributed well. However their star this season is Chloe Pearse, who has been enjoying a new lease of life since switching to the front row, clocking up seven tries o lead the Leading Scorers Table. Ominously, for Railway, there are nine forwards in Bohs squad who have crossed the whitewash this season, Fiona Reidy and Sarah Quinn worthy of note bagging four each.

There can be no denying that Bohs pack sets them apart. To counter this, Railway are expected to field internationals Lindsay Peat and Aoife McDermott in a strong looking pack but I still think they will miss the abrasive edge of last season’ players player Emma Taylor, who always seemed to thrive in these forward battles.

It’s Bohs for me in this one and, given my tipping record for this game over the years, it’ll probably be Railway who are the happiest.

The statistics favour Cooke in this one and as they haven’t sent in a team list the stats are all we have to work off. However, their statistics are somewhat flawed, given their walkover against Galwegians, but they still look like a 60% side and their position is a fair reflection of where they should be, despite their 30+ point loss to UL Bohs last week.

We’d a war with Cooke last season in Station Road and we know they’re tough, a physical side. They’ve good forwards and hard running backs. No getting away from Van Staden who runs big lines in midfield and is a player they’ll look to play off. We’ll be watching her and players around her as she has the skills to lay off the ball too as well as carry.

If we focus on her tho there are many other talented players so it’ll be key to try hold the ball as the best form of defence is always attack.

All this makes me think that Forbes is somewhat playing down his teams chances as he continues.

We just wanna keep moving forward. Each game has been some kind of progress and while that continues we’ll be happy with where we are.

Improvement is our only burden for now, which is a nice place to be, and hopefully we can test the Cooke girls in a variety of ways while keeping our accuracy high.

As with every week in the AIL – we can’t wait.

Cooke certainly have the players to consolidate a top four space and new coach Joe McTaggart has made his influence count, with a few positional changes, with some success.

Ilse Van Staden is a hugely destructive force in the tight and the loose but Beth Cregan, who’s picked up half of the Cooke Players Player nominations this season, has been having a great season and if this pair are on form the Cookies should come out on the right side of the scoreboard in what I expect will be a high scoring, entertaining, encounter at Station Road.