FRU Favourite Ella Durkan got her account up and running in Week 4.
Club Women

By Editor on November 20, 2019 0 Comments
FRU Favourite Ella Durkan got her account up and running in Week 4.
CLUB WOMEN ADVERTS

With the Women’s AIL sitting it out last weekend due to the Ireland Women’s International against Wales we decided to leave the wrap to this week ahead of the next round of fixtures.

The fixture between Cooke and Galwegians was cancelled with Cooke being awarded a walk over.

UL Bohemian and Railway Union have continued to harvest maximum points from their four games and with all the top four teams either winning or, in Cooke’s case, being awarded a bonus point win there has been no change to the standings. 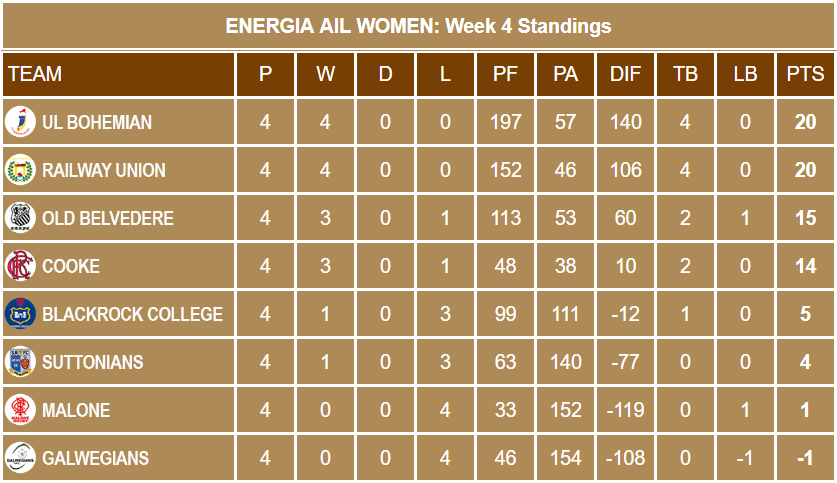 With only three games played in Week 4 it is the lowest scoring round to date, though it is only five points below the total for Week 2.

Fiona Reidy (UL Bohemian) was the leading scorer for the week, her 15 points coming from three tries. Allison Miller (Old Belvedere) was second with 10 points from two tries.

Miller’s efforts see her join Chloe Pearse (UL Bohemian) at the top of the Leading Scorer’s Table with Reidy shooting up to joint 4th with her weekend haul.

Previous  leader Hannah O’Connor was at an Ireland camp that weekend and didn’t feature in the league matches. 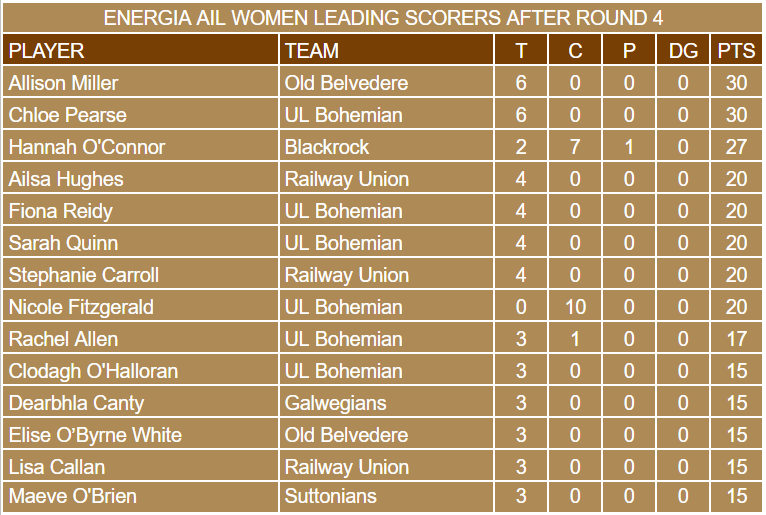 UL Bohemian are the leagues leading scorers with 197 points over the four rounds and their prolific scoring is reflected in 6 players named above in the Leading Scorers table. Railway Union are next in line with 152 points to date.

You can view the individual teams scorers below.

There were only six nominations for Week 4. The players nominated by their opponents as follows.

Congratulations to all players.