Ruairi Shields moves to 4th in the scorers table with his 8 point haul at Malone.
Club Men

By Editor on November 13, 2019 0 Comments
Ruairi Shields moves to 4th in the scorers table with his 8 point haul at Malone.
CLUB MEN ADVERTS

It was a mixed bag for the Ulster clubs in Energia AIL 1B at the weekend. Banbridge recorded their second win on the bounce but City of Armagh and Malone lost out, though Malone did pick up a losing bonus.

Armagh’s loss sees their opponents Shannon leapfrog them as do Old Belvedere who picked up a losing bonus at Highfield. Malone stay in 6th place but Banbridge are now just a point behind in 7th , the Rifle Park outfit moving up one following their win.

Highfield remain undefeated at the top of the table and Old Wesley remain in second place, also undefeated, after their fixture against Navan was postponed.

At the bottom of the table Naas and Navan still seek that first win. 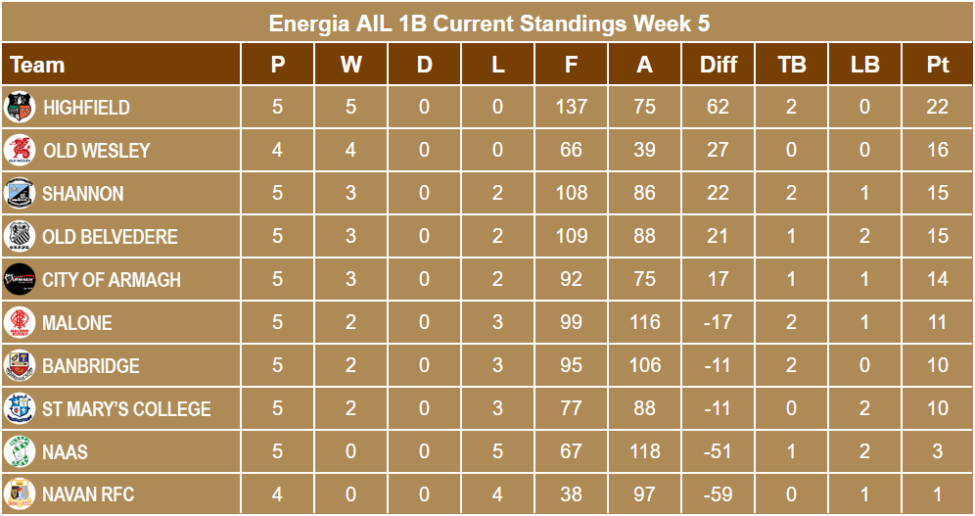 With only four games completed at the weekend it was, unsurprisingly the lowest scoring week so far this season with 101 points scored.

The points came from 11 tries, 8 conversions (73% conversion rate), 9 penalties and the leagues first drop goal of the season was slotted over by Highfield’s Shane O’Riordan.

O’Riordan ended up as the leading scorer for the weekend with 9 points closely followed by Adam Doherty (Banbridge) and Ruairi Shields (St Mary’s College) who both picked up 8 points.

O’Riordan consolidates his position in second place behind Old Belvedere’s Steve Crosbie,  Shields moves up one place to 5th and Doherty makes his first appearance in the leading scorers table at 10th.

Colin O’Neill (Highfield) and Pa Ryan (Shannon) both picked up a try to make it 5 each for the season to date, putting a bit of space between them and the chasing pack of Jamie McGarry (Shannon), Andrew Willis (City of Armagh), James Cronin (Highfield), Fionn Higgins (Naas), Jack Keating (Old Belvedere), James McKeown (Old Belvedere) and Hugo Conway (St Mary’s College) who are all on three tries.

To date, 78 different players have scored 888 points between them in AIL 1B so far this season. Highfield lead they way with 137 points and it’s been Highfield’s 17 tries combined with an 82% conversion rate that has kept them clear at the top of table.

Shannon in 3rd place have scored 15 tries but with a conversion rate of 60% they are leaving too many points on the pitch compared to Highfield.

Highfield’s only minor concern is that over 50% of their points have come from two players, O’Riordan and O’Neill, so they will want to ensure this dynamic duo stay injury free for the duration.

Malone and Shannon have the highest number of individual scorers to date both having 11 players contribute to their, respective, 99 and 108 points.

You can peruse the individual teams scorers below at your leisure.