You are at:Home»Competition»All Ireland League 1A»Energia AIL 1A Week 6 Wrap.

Ulster's Robert Baloucoune flags his first appearance for Hinch this season with three ties.
All Ireland League 1A

With the Energia 1A having a week off this coming weekend we’ll have a quick look at the results from Week 6 and update the leading scorers.

We’d predicted wins for Cork Con, Dublin University, Young Munster and Terenure and at draw at Garryowen so only two out of five. If we’d have gone with the three game form stats alone we’d have had four out out five.

The only game that bucked the current form, and our “gut feeling”, was the game between Dublin University and Ballynahinch. The stats for this one suggested a narrow win for Dublin University in a high scoring game so not a total disaster and it was good to see the Ulster boys get their second W against their names.

The game had an impact on the top half of the table with UCD leapfrogging Terenure to go second. Garryowen’s win against Clontarf sees the Limerick side move up one to fourth.

It was the second lowest scoring round of the Energia AIL 1A so far this season with 165 points scored. The points came from 19 tries, 14 conversions (74% conversion rate) and 14 penalties.

Robert Baloucoune (Ballynahinch) and Jack Ringrose (UCD) were the rounds leading scorers with both scoring 15 points from three tries. Michael O’Kennedy (Dublin University) and Aaron Cairns (Ballynahinch) were hot on their heals with 14 and 13 points scored respectively.

O’Kennedy’s exploits see him overtake Sean O’Hagan at the top of the Leading Scorers Table, the Hinch player being underutilised this weekend, his teammate Cairns moves up three places to sixth following two high scoring weekends on the bounce. 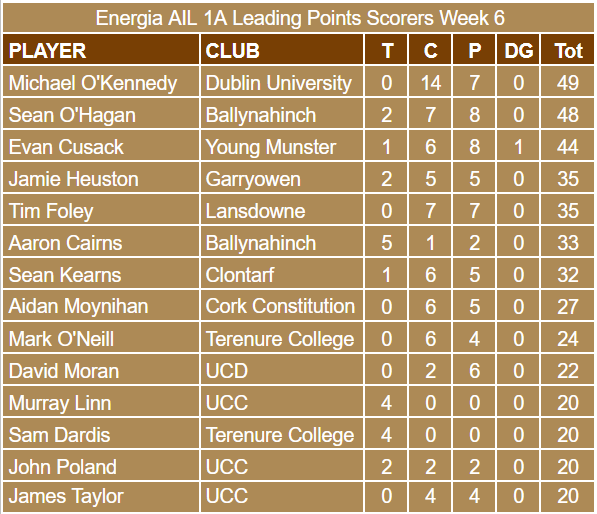