You are at:Home»Club»Club Men»Club Men: Energia AIL 1A Week 3 Wrap.

The Men’s Energia AIL resumes this weekend with a full set of fixtures across all the leagues.

Ulster are represented in AIL 1A by Ballynahinch and it’s been a difficult campaign so far for the Ballymacarn boys who have yet to hit their straps after promotion from AIL 1B last season.

We caught up with Hinch in the last round when their discipline let them down against UCD and that result saw them drop to the bottom of the league with no wins from three starts.

The results from the last round as follows:

Wins for UCC, Terenure and Cork Con leave these three teams unbeaten after the opening three rounds and they are starting to put a bit of distance between themselves and the other sides with UCD the only side staying in touch with 2 wins from three.

It’s early days yet but our friends in Ballynahinch are already 12 points behind the league leaders. As we saw last year, they are capable of putting together a sustained run. However, a run of four or five wins on the bounce is a different proposition in this league and they will need to start scraping up a few more points now. 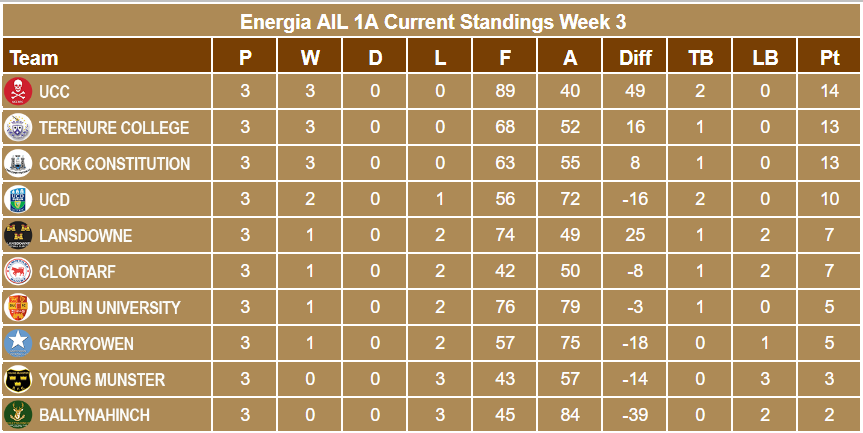 Hinch have a couple of games coming up where they should be looking to harvest more points with Garryowen (a) and Lansdowne (h) next on the fixture list. Both sides are in the one win from three bracket, at the minute, though both sides finished in the top half of the league last season. There shouldn’t be any easy games at this level and it’s looking like there aren’t.

This weekend’s fixtures are below, with the tie of the round looking like Terenure v Cork Con as second host third at Lakelands Park.

The teams clocked up 197 points last time out, down from the previous rounds’ high of 249 points. The scores came from 25 tries, 18 conversions (72% conversion rate) and 18 penalties.

There is some joy for Hinch with out-half Sean O’Hagan sitting at the top of the Leading Scorers Table as the teams go into the fourth round. The bad news is that O’Hagan’s boot accounts for exactly two thirds of Hinch’s points, the Ballymacarn outfit the lowest try scorers in the league.

Lansdowne’s Tim Foley and Dublin University’s Michael O’Kennedy are next in the kicking stats with 29  and 26 points respectively. There are four players with three tries each with Adam Leavy (Lansdowne), Matt Bowen (UCC), Murray Linn (UCC) and Tommy O’Hara (Garryowen) all averaging a game a match.

Unsurprisingly, league leaders UCC are the top try scorers with 13 to date, Dublin University next in line with 10. 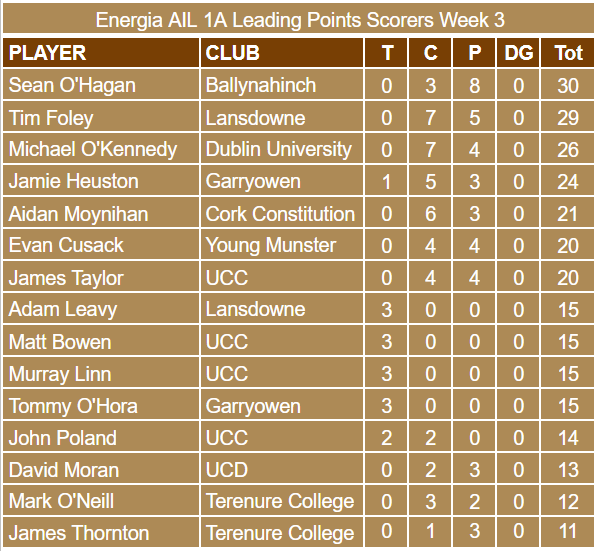