You are at:Home»Club»Club Women»Club Women: Energia AIL kicks off this weekend.

Who will be challenging Railway Union this season in the Energia AIL?
Club Women

By Editor on October 10, 2019 0 Comments
Who will be challenging Railway Union this season in the Energia AIL?
CLUB WOMEN ADVERTS

The Women’s Energia All Ireland League kicks off this weekend in what promises to be an exciting season for the women’s game.

The league has been restored to eight sides, following the promotion of Suttonians and Malone, and the Round 1 fixtures have thrown up pretty difficult fixtures for the league’s newcomers with Suttonians hosting, defending champions, Railway Union and Malone hosting, All Ireland Cup champions and “team of the decade”, UL Bohemian.

We’ll be covering those two matches as our featured games, the rest of the fixtures below: 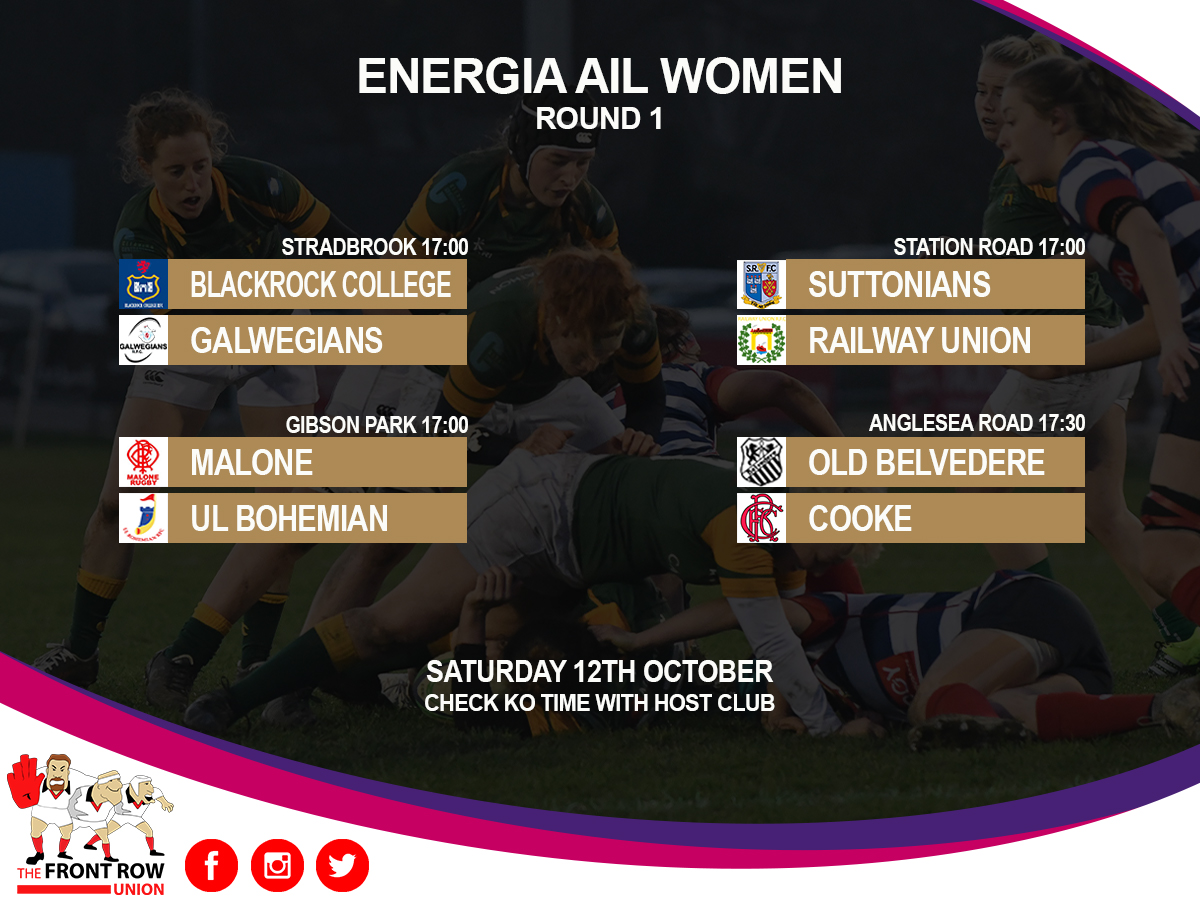 We caught up with the teams to find out their player ins and outs and expectations for this season and you can find those details in the drop down boxes as we preview this weekend’s matches below.

Expecting to push on our finish from last year. We have high ambitions and drive amongst the group.

We are excited to get going and are delighted to add to our group and we’r particularly excited to have two women’s teams in Rock this year with our J1s off to a flier in Leinster League Div 4.

We have signed a few new faces this year. A few girls who are looking to progress from some college Rugby and then some girls who are only just picking up the sport so it is all a building process and we are really looking forward to the season ahead.

We have a good few players who have moved for work and some are gone travelling.

We are  looking to build on our learnings from last year. Once we get some games under our belt and start building we are 100% aiming for that top four position.

We have great potential and lots to work on but our focus is on consistency. We may have fallen short of that last season, and ended up out of the top four going into the last few games, but, this is a new season and we are just really looking forward to getting started with our AIL season and what our Galwegians women can bring to the competition.

Despite losing Ireland’s most successful Women’s Coach, Philip Doyle, to Scotland Women, at the end of last season, Rock appear to have recruited well, adding some experience to their young side.

Niamh Fitzgerald has stepped up to head coach and, given that she worked with Doyle, both at Ulster and at Rock, it should be a fairly seamless transition. If the team can replicate her all action style as a player, they should pick up a few extra points this season. Hooban, (St Mary’s) and Liston (Cooke) are two strong signings and we expect Virginia youngster Lisa Mullen to be making an impact by the end of the season.

It’s been a more difficult summer for Galwegians who have lost Nicola Friday (Old Belvedere) and they will be without Denise Redmond (Japan) for the start of the season (stay safe Denise ). Apologies to Galwegians, we picked up the wrong Mary Healy and we’re delighted to be corrected that the Connacht stalwart will be captaining Galwegians this season.

The Bluebells are likely to have a difficult start to their league campaign, but we’ve every confidence that they will dig deep to keep the Connacht flag flying in the AIL and, as always, Crowley Park will be a difficult venue for visiting teams.

However, Galwegians are not there yet, as evidenced by their AI Cup defeat to Tullamore last weekend, and   we expect Blackrock to edge this one.

We are happy to be involved in AIL and know there are going to be difficult days but we are hoping to continue to improve on our performances and build on our squad experience at the highest level; and get a few wins along the way.

We still have a very strong team, a lot of young signings along with experience, and I would expect this team to continue as we have in recent years by progressing into knockout stages in the top four.

It’ll be a challenging opener for Malone as they kick off their AIL campaign with a home fixture against UL Bohemian,  the most successful women’s club of recent years.

Despite last week’s comfortable win, away to Shannon, in the AIL Cup the experienced Davitt will have no illusions about the challenges ahead and she will be looking for consolidation this season. However, this young side will cause a few upsets along the way.

UL Bohemian will be looking to regain the AIL Title, having lost out to Railway Union last season, and new coach Fiona Hayes certainly got her new career off to the best of starts as she guided Munster U18’s to the Interprovincial title albeit with the minimum of wins 😯 . The team has the best ethos in the women’s game, they know how to win, and despite picking up the AI Cup last season they will not regard it as a successful season.

I expect it to be an exciting game at Gibson Park but Bohs should come out on top.

No expectations at all and relishing a season without them.

We seek to be competitive in every game we play and have no doubt we will be challenged throughout. That’s why we want to be here though, and we look forward to learning and growing.

We’ll leave expectations for next season when we’ve a better line of sight on the league itself. For now we are focused on us and establishing ourselves among the best teams in the country, which is what’s the All Ireland League is all about – the best.

We also employ a number of specialist coaches as required, for areas such as lineout throw coaches, kicking coaches, scrum coaches, etc.

We’re in a period of transition in the forwards with some retirements and off-season provincial injuries ruling Chloe Blackmore, Siobhan McCarthy and Emma Murphy out for the season. Emma Taylor is also with Canada preparing for their November series and won’t be back until after that.

We’ve had a fair bit of transition in the outside backs too but we’ve recruited reasonably well.

Our expectations for the season are that we as a club continue to create an environment to develop athletes to be the best they can be. It’s a journey rather than a destination. We are very clear that we want to run the best program for female rugby players in Ireland.

The players have their own goals around the season, both at a team and a personal level. They look at it differently, they look at destinations and I’m pretty sure every one of them will say that that destination is retaining their AIL title.

It’s has been Suttonians aim to get into the AIL for a few seasons and, now they are there, the TRIBE face a difficult opener as they welcome defending champions Railway Union to their North Dublin headquarters.

However, it’ll be a challenge that they relish, though they will be disappointed that they didn’t get any game time under their belt with last week’s scheduled AI Cup match ending up as a walkover against Tralee.

Railway did get that all important game time under their belt, with a win at Tullow in the cup and, though they are in a rebuilding season with a lot of new talent joining, they do seem to have their player development pathway down pat and won’t be expecting any drop in standards.

The visitors will be missing some grunt up front, particularly in the early stages of the league, but their expansive game should alleviate that impact and I expect  Railway to make the short journey home with a win.

A key goal for us is to develop players. We want to ensure everyone enjoys training and improves their game. Its going to be tough with a lot of girls getting called up to Ireland, but its great for the club. We hope to get the 15s and 7s players for as many games as possible, we enjoy having them on the team.

The match performances and how we bring what we learn in training to the pitch is what we’re focused on, we want to enjoy our rugby. The aim of course is to try and win every game and be competitive, we’re taking it one game at a time.

We are aiming for a top 4 finish in the AIL,  but as a club our weekly focus will be on improved performances and player development.

It is a season of new challenges for Cooke Women, for so long the undisputed Queens of the women’s game in Ulster. They will be disappointed with their finish in last seasons AIL and in Malone they face a genuine challenge on the home front.

However, they have a new coach in charge and the innovative Joe McTaggart will relish the challenge. They certainly laid down a strong signal of intent last weekend with an impressive win at Westport in the Cup and in Vicky Irwin, they have a maturing out half that they could build an exciting game around.

In Old Belvedere, they face a side of the highest pedigree. The original D4 Duchess’ are perhaps the best positioned team this season to push on for the title. They certainly will not have enjoyed being usurped by Railway last season but Maz Reilly and her coaching team have recruited well and they comfortably disposed of City of Derry last week in the cup.

We expect Belvo to win this one at home on Saturday despite a strong challenge from the Cookies.