By Editor on October 30, 2019 0 Comments
Holly Brannigan opened her AIL account with a brace against Railway Union
CLUB WOMEN ADVERTS

The Energia AIL continued apace at the weekend for the Women’s sides despite another Ireland camp depleting a few of the top sides.

Cooke were the big winners of the weekend, taking full advantage of the Ireland management teams selection penchant of not selecting any Ulster player playing in Ulster, by recording a bonus point win at Blackrock.

Boh’s and Railway absorbed player losses with wins against Galwegians and Malone respectively though Galwegians were just a try short of a bonus point and Malone had Railway on their toes until the closing stages at Gibson Park.

Belvo came bouncing back from their defeat to Railway, in Round 2, with a comprehensive win against Suttonians. FRU Favourite Fiona Tuite bagged her first try of the AIL season but was somewhat overshadowed by four from superstar Alison Miller.

The full results below.

Blackrock were the big losers as far as league position is concerned with Cooke and Belvo both leap frogging the Stradbrook side. Also of note is Malone moving off the bottom of the table at the expense of Galwegians. 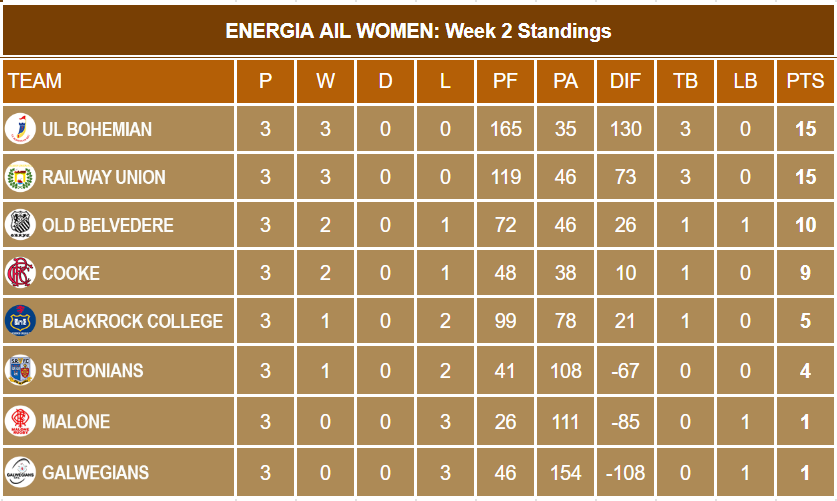 Alison Miller was this weeks leading scorer with 20 points from her four tries.  Miller’s double brace see the Old Belvedere player leap into the top four in our scorers table.

The leading scorers are shown below.

You can view the individual club scorers in the drop down lists below.

The players player nominations are below. Shout out to Mary Healy and Julia Bauer who each pick up their second nomination this season.

The teams have a weekend off with the next round to be played on Saturday 9th November as follows. (Note date and kick off time subject to change!)