You are at:Home»Ulster»Ulster Men: Squads up for opening U18 Schools Interpros.

James Wright in action for Ulster Schools against Italy U18.
Ulster

Ulster Men: Squads up for opening U18 Schools Interpros.

By Editor on August 16, 2019 0 Comments
James Wright in action for Ulster Schools against Italy U18.
ADVERTS

The squads are up for the IRFU U18 Schools Interprovincials which kick off on Saturday at the University of Limerick Pavillion 3G Pitch.

This is a nice initiative from the IRFU which sees the Club and Schools provincial players come together for an 8 day festival of rugby. Matches will be played on Saturday 17th August, Wednesday 21st and Sunday 25th with the players given instruction on Nutrition, Player Pathway, Self Management and Mental Skills as well as coaching sessions  from IRFU staff in the intervening days.

Ulster, Munster, Connacht and Leinster all field teams in the Club sections with IQ Rugby (Irish Qualified players in the UK) replacing Connacht in the Schools sections.

This is the second year of the initiative.

How did Ulster U18 Schools do last time?

Ulster schools did pretty well last time out, losing to Leinster in their last match of the tournament to finish second with two wins from three. They scored 75 points and concede 64 over the three games, their results are shown below.

We said at the time,

“The Ulster Schools side were comfortably the most exciting team on show in both competitions and they really should have wrapped up their half of the tournament with something to spare.

Unfortunately their decision to play a kicking game in the second half played into Leinster’s hands and three very soft tries gave the boys in blue something to defend, which they did with resolute determination.”

How will they do this time?

They should be genuine contenders once again though they looked more controlled than entertaining in their win against Italy U18 earlier this month.

It was a composed performance against Italy, who had beaten Leinster U18 Schools a few days earlier and in centre Ben Carson and scrum half James Wright they have players capable of breaking up a game. The pack looked hard working and well balanced and with, new coach, Willie Faloon in charge you know that the team will keep pushing until the final whistle.

When do they play?

The fixtures for the U18 Schools Competition are shown below. Ulster kick off against Leinster on Saturday before playing Munster mid week and finishing against IQ Rugby the following Sunday. 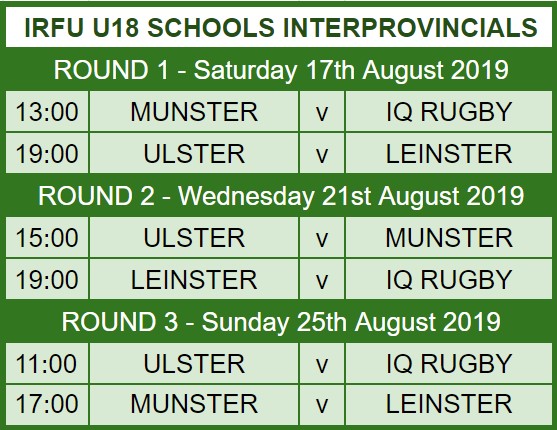 Who’s in the squad?

There are 10 schools represented in the squad, a squad that sees a significant switch away from the Belfast “big three” which have dominated schools rugby over the years.

Ballymena Academy dominate the 26 player squad with 10 representatives, Wallace High are next with 4 players and, Schools Cup Winners, Methodist College are third with 3 players in the squad.

The Ulster Schools squad and their opponents Leinster are shown below.

*Jude Postlethwait will be with the Ireland U18 Sevens side for the first round of fixtures.
Note: Squad subject to change.