Ireland’s bid to host the 2023 Rugby World Cup has hit a stumbling block after Rugby World Cup Limited unanimously recommended the selection of South Africa as the hosts of the tournament. 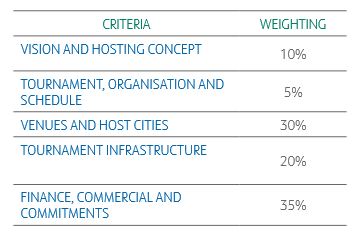 France and South Africa used their experience in holding UEFA EURO2016 and FIFA World Cup 2010 to their advantage and rather unsurprisingly, Rugby World Cup Limited (RWCL) noted this in their report: “Ireland does not have the same level of major event experience.” They do believe that hosting four matches in Dublin as part of EURO2020 will be beneficial in future bids as it will “assist in building major event experience in Ireland”.

Infrastructure was a major concern from the outset and this was the case in the report, “Ireland’s match venues require significant work … creates a higher risk than venues already at a world class standard.” This is a rather straightforward response and not many people can have too many complaints about – why should RWCL back a bid with insufficient stadiums when the other bids require little or no construction work to their stadiums? Ireland were proposing a tournament with 95% seating and 5% standing, a compromise on World Rugby’s initial proposal of 100% seated stadiums.

Although Ireland meet the minimum tournament fee, they aren’t able to match that of France and South Africa.

Concerns were raised in the report over Parc Ui Chaoimh (Cork), Pearse Stadium (Galway) and Fitzgerald Stadium (Killarney) stating that they would “require a significant level of overlay which is flagged as a risk, given the amount of work required to bring these venues up to RWC standard”. In addition, the board believe that “hosting cities may rely on adjacent cities for capacity.” They did however believe that Ireland’s intercity transport would meet the requirements

South Africa predicted gross ticket sales of 2.91 million, a staggering total that dwarfs Ireland’s figure of 1.6 million. Attendances in the Currie Cup have not been spectacular recently, however international rugby garners a greater interest than domestic rugby in the majority of nations around the world.

The panel did note that, “Ireland have strong attendance across domestic, cross border and international rugby, with a rugby supporter base that is matched only by New Zealand in percentage of population.” I suppose we can cling to that as a minor victory

On 15th November, the World Rugby Council casts their vote in a secret ballot as to which nation they want to host the RWC2023. Bidding nations are not permitted to vote and an absolute majority is required to secure the hosting rights to the competition.

Ireland’s chances of hosting Rugby World Cup 2023 have all but diminished however IRFU Chief Executive, Philip Brown believes Ireland are still in with a chance of securing the tournament.

A break down of the final recommendation.