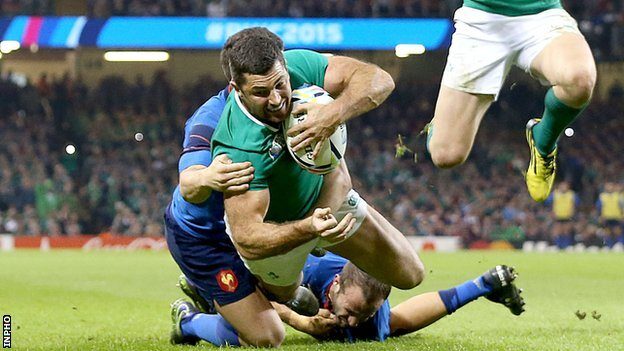 Ireland put France away 24-9 at the Millennium Stadium on Sunday to top Pool D and set up a desired quarter-final with Argentina next weekend.

Tries from Rob Kearney and Conor Murray saw the Irish overcome the French in style, after battling with injuries to three of their key players, Johnny Sexton, Paul O’Connell and Peter O’Mahoney.

Captain O’Connell suffered a nasty hamstring injury at the breakdown and was removed before the interval, with O’Mahoney leaving in the second-half after a similar collision.

Sexton kicked both of the first two penalties on offer in the 12th and 18th minutes before leaving the field with a groin injury after 25, proving France’s predicted targeting of the fly-half.

Ian Madigan stepped in as the replacement and produced a superb display which started with a successful penalty attempt shortly after Sexton’s dismissal. A half-time score of 6-9 in Ireland’s favour kept everyone on tenterhooks before an impressive second-half display from the Irish hammered home their domination.

Robbie Henshaw continued to challenge the French line with several bustling runs through midfield, eventually leading to Kearney’s try in the 49th minute. The Leinster man making a powerful dart to the line right of the posts with Madigan narrowly missing the conversion.

Morgan Parra’s penalty closed the gap to 14-9, after two previous penalties from Scott Spedding kept the French in contention. However, Conor Murray went over for Ireland’s second score with nine minutes remaining, after outstanding work from Devin Toner, Sean O’Brien and Rory Best pushed France back to open up the gap for the scrum-half.

Madigan converted and produced a long range penalty strike with three minutes remaining to conclude the scores and confirm Ireland’s first World Cup win over France after defeats in 1995, 2003, and 2007.

Following on from a serious and daunting injury list for Joe Schmidt’s men, there appears to be another spanner in the works. In the opening minutes, flanker Sean O’Brien seemed to land a right hand punch on the chest of Pascal Pape. It wasn’t spotted by officials at the time but he may be cited and miss several games as a result.

O’Mahoney has been ruled out of the World Cup after Sunday’s terrific display with O’Connell’s tournament also looking likely to have ended. There is more optimism surrounding Sexton and news should arrive later in the week regarding his fate for Argentina.

How the Ulstermen rated:

Rory Best – Ever-reliable. Impressively solid at the ruck and carried effectively into a French wall to help set the base for Irish pressure in close quarters. (8/10)

Tommy Bowe – Created a memorable break and pass into the arms of Keith Earls in the first-half, which would have handed Ireland their first score if Earls had gathered. Nailed his reputation as one of the team’s best kick-chasers and proved his worth as a key starter. (8/10)

Iain Henderson – On for an injured O’Connell tested young Henderson’s strength but, once again, he stepped up to the challenge and has provided us with hope in a team who look likely to continue without their talismanic captain. Penetrated the French with sheer physicality and shall be relied on as we approach the road to the final. (7/10)

Chris Henry – Another player who has proved Ireland’s forward strength in depth. Henry is a terrific workhorse and should now be taking a starting role following O’Mahoney’s departure. (6/10)