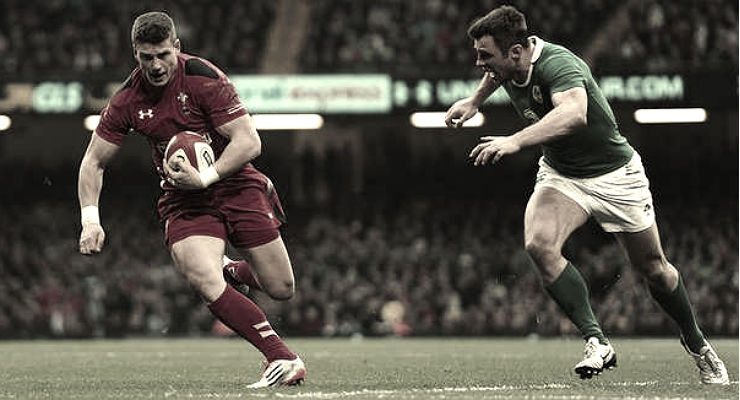 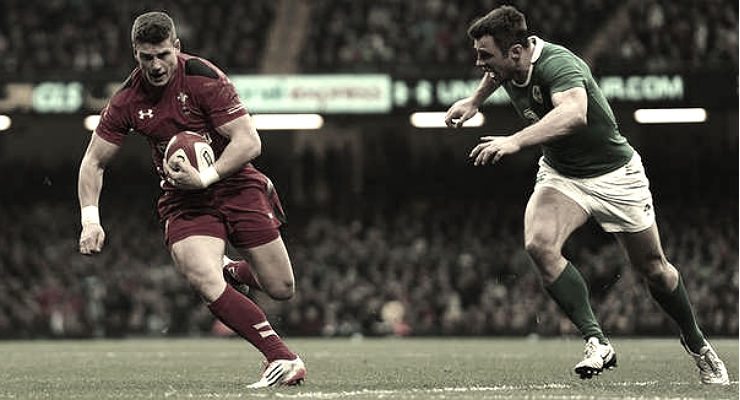 Tommy Bowe can only watch as Scott Williams races for the line.

Ireland lost out on any chance of collecting a Grand Slam this season following a 23 – 16 defeat to Wales in the Millennium Stadium on Saturday afternoon.

Having praised Joe Schmidt last week, following the win against England, I have to say that the Irish coach was found wanting this week as his team and tactics were ruthlessly exposed following a clinical performance from the Welsh.

Of course it didn’t help Schmidt that two of his star performers had their worst games this series with Rory Best having a nightmare in the line out and Johnny Sexton spending much of the game half a step behind play. Best was pulled reasonably early but Schmidt bottled it with the talismanic Sexton.

It didn’t take long for Ireland to realise that they were in a game as Wales smashed their way to a 12 – 0 lead, in the first thirteen minutes, through four Leigh Halfpenny penalties. Despite being thoroughly worked over in the opening exchanges Ireland responded with three penalties of their own but really should have done better, only coming away from a Welsh yellow carding three points to the good after Dan Biggar nullified a lot of Ireland’s hard work with a well taken drop goal.

As it was the teams turned round with Wales leading 15 – 9 and everything to play for!

The second half was a case of who would blink first. Ireland upped their game and pounded the Welsh line for an almost interrupted 45 phases without reward. The Welsh defence was magnificent and despite being pinned deep in their own half throughout the Irish attack you couldn’t help but feel that Wales had taken a massive step towards securing the game.

A Welsh victory looked assured minutes later as an off the pace Cian Healy was turned over and Wales counter attacked with a far more clinical edge. Ireland helped Wales on their way with, another, misfiring line out and minutes later Scott Williams cut through the Irish defence to put Wales 11 points clear, but more than that it was in effect a 13 point turnaround.

Ireland brought on a raft of fresh blood which did have an immediate effect with a converted penalty try, bringing it back to a four point game. It was created by brute force and disappointly Ireland never managed to change the shape of their game.  Wales regrouped to knock over another penalty and, despite attacking till the final whistle, Ireland lacked the imagination to storm the resolute Welsh defence.