You are at:Home»Ulster»Ulster Men»PRO14»PRO12: Teams up for Ulster v Zebre 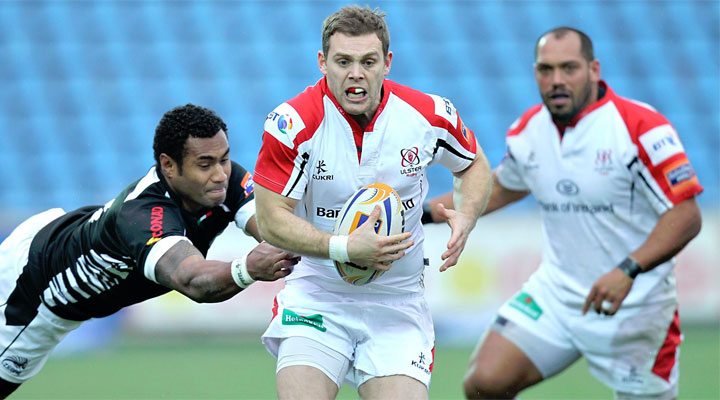 By Editor on September 11, 2014 0 Comments
Darren Cave's rich vein of form continues with a try against Zebre. Picture from BBC Sport.
ADVERTS

The road to the World Cup starts here for Cave. (Picture BBC Sport)

Rory Best makes his first appearance of the season for tomorrow’s PRO12 fixture against Zebre at Ravenhill. Kick Off 7:35 pm.

Best is one of eight changes from the topsy turvy draw in Llanelli as he is joined in the starting line up by Andrew Warwick, Lewis Stevenson, Nick Williams, Ricky Andrew, Andrew Trimble, Luke Marshall and Darren Cave, with Cave also making his first appearance of the season.

Injury to Jared Payne has given the IRFU an opportunity to look at Plan B in the centre with Cave, once again, teaming up with Luke Marshall. It’s always a mystery to me that the Irish set up hasn’t pencilled Cave’s name in for the vacant BOD spot, and simply picked whoever can play with him, most likely Olding, but there you go. Certainly he’ll have a chance to show his abilities to the full against a fairly weak Zebre and Ulster will have to produce a better performance than the last two stilted outings against the Italians!

Another player needing a big game, albeit for different reasons, is Wiehahn Herbst who has failed to impress in his limited game time. His season so far has been, literally,  on, off, on again in the front row and, though I believe he had a good outing against Leinster, I have still to see a performance of note.

Early days yet, but if he continues to fly under the radar in this game then it will be a concern.

As for the rest, it should really be a routine five pointer against a struggling team and the starting XV should be more than able of producing the goods. If not there is plenty of class on the bench, Olding, Ludik and Wilson in particular, that can come on.

The FRU Predicts: Five points and six tries for Ulster and a couple of soft ones to Zebre. #SUFTUM.