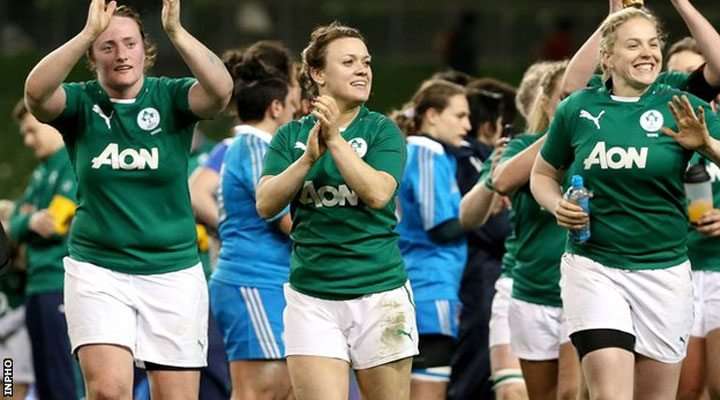 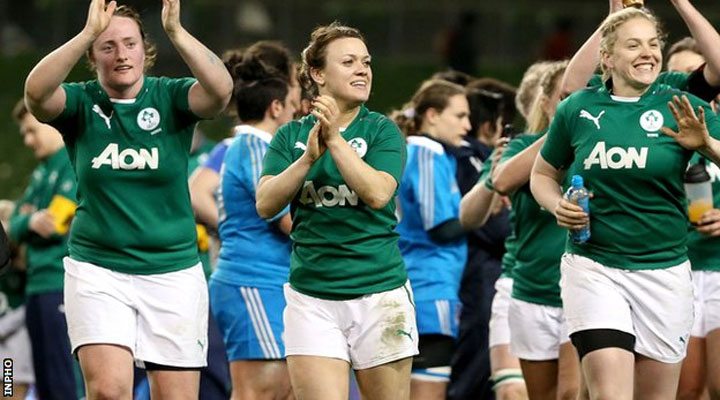 Ireland Women made the most of their first ever appearance at the Aviva, scoring five tries in their 39 – 0 win against Italy in the Women’s Six Nations. 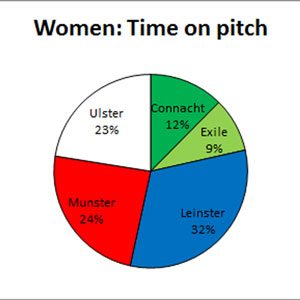 Time on the pitch by Province for Irish players against Italy.

Ulster’s Stacey Lea Kennedy and Grace Davitt  both had strong games in attack and defence and Amy Davis kept the team going forward at scrum half before being replaced by Ulster exile Larisaa Muldoon. The talented Ashleigh Baxter had a strong defensive game in the back three, allowing Briggs and Miller to break forward with confidence.

Ireland Coach Philip Doyle changed tactics from the previous two outings against Wales and England pairing Kennedy and Gill Bourke in the front row to maximise the ball carriers in the pack and the tactics bore fruit with two early penalties from Briggs.

Kennedy, in particular,  put in a strong shift during her time on the pitch but it was a barging run from her colleague Burke that allowed Nora Stapleton to send Molloy clear for Ireland’s opening try on the 28th minute. Briggs converted and Ireland had worked a 13 – 0 lead.

The Italians, who went into the game on the same points as Ireland, were no push overs but Ireland raised their game in the closing minutes of the first half and after a period of pressure in the Italian 22 Cantwell spotted a gap and dummied her way over the line. Briggs added the extras and Ireland went into the break with a 20 point lead.

A hard working Miller put the game to bed shortly after the break with a typical power packed run up the flank and with the score at 25 – 0 it was damage limitation time for the visitors.

However a clinical and confident Ireland continued to press and a scrum near the Italian line saw O’Brien sprint over untouched from the back of the scrum. Briggs converted to push the score to 32 – 0.

Doyle swapped out his bench with a view to next week ends decider in Pau but the replacements came on to to stake their claim and Jenny Murphy put her hand up with a barging run for Ireland’s fifth try in the dying minutes.

Stapleton, taking over the kicking duties from the departed Briggs, knocked over the conversion with the last kick of the game.

With France romping to a 69 – 0 win against Scotland this afternoon and with England hot on their heels, Ireland go to Pau next Friday needing a substantial win if they are to successfully defend their Six Nations title.  They need to beat France by 19 points and hope that England beat Italy by less than 29 points I believe. It’s a big ask in this extremely close competition where even a win in France could still see Ireland finishing up in third palce!