You are at:Home»Features»Ballpark»Ballpark: THE EMPIRE STRIKES HACK 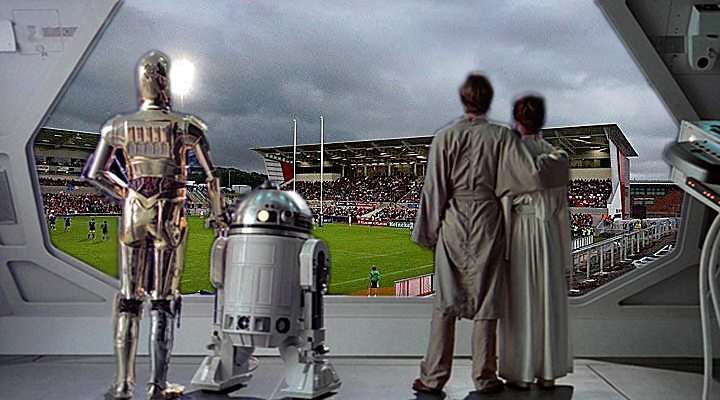 A sneak preview of the view from the hospitality suite in the "New Old Stand"!
Ballpark

By Ballpark on December 27, 2013 4 Comments
A sneak preview of the view from the hospitality suite in the "New Old Stand"!
ADVERTS

A sneak preview of the view from the hospitality suite in the “New Old Stand”!

Somewhere along the road, whilst following a pride of Lions in June 2013 the light that had burned so brightly in the pursuit of rugby, either as a fan or a player, was almost extinguished.

This was the road away from Damascus, and towards other horizons. As readers of last season’s rugby blog will have garnered, cycling has consumed me in an all embracing passion and rugby which was having to compete with this new found interest is losing for a variety of reasons.

The game itself has become somewhat formulaic. By and large gone are the ’characters’ who played with a passion on the field and with flair off it, to be replaced with media hyped individuals who have found the spotlight at first enticing and latterly loathsome.

The rugby, there’s plenty of it on our screens, has become an endless series of drives much like American football where the possession is turned over when one or the other team makes a mistake or there are points scored. International rugby more so than the club game is now almost unwatchable.

Of course there are games that occasionally stir the blood, such as Ireland’s ‘almost glory day’ against New Zealand. That has to be balanced against majority of games that are boring and formulaic, dross, for want of a better word.

When it comes to Team Ireland I can take it or leave it depending on the mood. Ulster though still have some aura to prick the senses and stir my sensibilities.

I first went to Ravenhill in the late 80’s and have attended on a regular basis since, although last season saw a fall in my attendance due to circumstances beyond my control. Having witnessed the change wrought in the hallowed stadium I thought I might compare old Ravenhill with the new Empiric Ravers.

By chance I have missed very few games at New Ravenhill this season thus I can ‘go compare’ the stadium’ with the old version, an interim exercise that will be a little unbalanced as the New Ravenhill is not yet complete.

There is also the new Ulster to ‘go compare’ with the old Ulster over the last decades. Again as new Ulster is still building this is not a complete exercise, simply a view of transition and where it is going.

Old Ravenhill had a character about it. From the clackety turnstiles that could decapitate you at groin level if you didn’t time your entrance right, to the exposed terracing down which the wicked wind whispered and moaned.

On a bad night it lashed on you and conditions occasionally reached an apogee that even Bear Grylls would have had second thoughts climbing on to it.

Still there was a shoulder to shoulder camaraderie amongst the faithful that kept the faith in the team, even when the going on the scoreboard got as tough as the conditions on the Terrace. In between the grim, the good and the general, there where the little gems.

There are too many to acknowledge in this prescient piece but perhaps the one that stands out for many reasons is the semi final of the European cup against Stade Francais in 1999.

First of all there was the desire by the then CEO Micheal Ried to stage the game in Ravenhill, even if it meant ingenious methods to increase the capacity to the required 20,000. This was duly achieved and one memory is standing as if in a strait jacket on a packed terracing watching the flags fly in the stiff breeze that was the traditional trait of the Terrace’s prevailing weather conditions.

Of course there was rugby. Stade Francais along with Stade Toulouse, who had already been seen to twice at Ravenhill, were the top two teams in Europe. No matter the English were missing, (history may repeat itself in 2014), but the French teams were top of the Northern Hemisphere rugby tree.

The game featured a moment of individual brilliance in open play, a kicking exhibition from the turf and a collective performance rarely seen. Remember this was in the twilight time zone between the emergence of the professional game and the ebbing away of amateurism at the top level.

Ulster’s Englishman at the back, Simon Mason, produced the kicks for the 3 pointers, the team collectively produced the performance and Ulster’s current director of rugby conjured a try from nowhere with a brilliant piece of individual vision and skill.

Few who were there will forget the sight of Humphrey’s setting out from behind a scrum in his own 22, chipping ahead and taking the return pass from the winger, who had collected the kick, before swallow diving across the line.

The archaic stadium almost haemorrhaged its old steel and concrete structure under the weight of thousands of screaming souls, stamping feet and wild applause.

A game changing moment forever cast in the mind as a memory to treasure and a moment to nurture. As Van Morrison, one of Belfast’s sons wrote, (not with this in mind of course), but it seems so apt.

This is the kind of magic that has by and large been lost to the game, a piece of individual skill that is nowadays rarely allowed to flourish.

New Ulster now have a consistency about them. With the advent of home grown talent blended to Southern Hemisphere rugby nous, such that losing is a rarity and qualification for the knockout stages of the Heineken cup has become almost per se.

New Ravenhill is brightly lit, almost sterilised, in its persil white steelwork and linear concrete forms illuminated by spotlights, giving it the feel of an oasis in a sea of urbanity. A place where you can go and experience everything organised for you from your route to the Terrace to the authenticity of your ticket.

New Ravenhill has almost always ‘sold out’ signs up before the game but rarely a full house. It features fans who turn up late for the game, leave early and who spend their time there chatting rather than watching the rugby.

There is something lost in the transition from old to new, and it’s not just the old concrete and steel edifice that was known as the grandstand.

There is also a feeling of being lost amongst the blinding brilliance of the lights and pearly white of the stands. A perceptible feeling of anonymity, a feeling of lost character, perhaps a circle that will be complete when the stadium’s finished or will right itself on the final brick in the wall.

On the pitch, the team compete in a game of numbers. 3 moves down the blindside then switch to open play and 2 rumbles by the forwards followed by spinning it to the backs. The individual brilliance that illuminated the stadium in 1999 is all but gone, now a fading memory like the date on the memorial clock wall.

In memoriam, the ghosts have forgotten why they’re there, the empire strikes hack.