You are at:Home»Features»Ballpark»CANT AND RANT
Ballpark

South Africa duly beat Ireland on Saturday last and it’s not as if the world has caved in judging by the reaction of everyone from Gerry Thornley to Last Knight of the Proms.

I must admit to suffering a mild reaction after watching the match, but that can be put down to having had the endurance to sit through 80 minutes plus of mind numbingly predictable rugby.

There was nothing a few glasses of wine wouldn’t alter and by next morning I was on my way in the early morning rain. Yes, sure as Ireland are entirely predictable with Kidney at the helm, so our weather plays up to the national stereotype of damp at dawn.

Sure as the dark clouds blight the sky so does the amount of provincial handwringing sprout like blisters on burnt fingers. I have lost interest in Ireland but do feel sorry for the players who look like absolute stars for their province and turn into comic wannabees when stuffed into a green shirt or in Saturday’s instance, a black one.

If he mentioned it once he must have said it at least twice. Keith Wood, who as a rugby pundit is the complete antithesis of his former committed playing style, made some hay out of the lack of secession planning. Ireland have not planned for this day intoned Keith in so many words and he’s right.

Increasingly it all leads back to an increasingly beleaguered coach. Have to say I had much admiration for Kidney and Munster in Europe, but that was then and this is now.

The signs that Kidney is at best a provincial coach and most at home in his Munster backyard, were there for a few years prior to his Ireland supremo appointment.

He was uncomfortable acting up to Eddie O’ and though this was seen as a clash of personalities it might also have been Kidney out of his well nurtured roots.

Add to that the brief flirtation with the Dragons and the detour to Leinster were he left a fuming squad behind and it appears, the ramifications, some suggest, still linger during this Irish tenure.

You can take the boy out of the province but not the provincial out of the boy as would appear to be the case with Kidney. He still talks endearingly about ‘the fellas’ and Earlsy as though he still in charge of a class in Kinsale.

This is ok whilst things go swimmingly but when the ship hits choppy waters and is in danger of sinking in a morass, then the charm becomes smarm and the sound of sharpening knives become magnified.

I really struggle to say anything fresh and imaginative about Ireland and Kidney, even the Grand Slam was achieved in a manner less than to the manor born.

Secession planning, the words of Keith Wood continue to ring an alarm bell.

On Thursday night I took to the spinning machine in my garage. This is an antiquated gizmo, armed with pedals and handlebars on which you sit and pedal to your heart’s content, bored out of your mind, whilst going absolutely nowhere.

From an Ulster perspective the fact and apparent first up joy at 14 players being with the Ireland squad should be tempered by the reality that most of them are there to hold tackle bags and get a taste of the Irish set up for the future.

Darren Cave’s been doing this for about 3 years now. How does he remain so sanguine?

The future is probably sometime around 2020. Then it will dawn on the powers that be in the IRFU that the Irish team may be allowed beyond its traditional remit of Munster/Leinster combined and supplemented with a few players from other provinces or across the water if they’re really desperately low in player resources.

In the meantime, Ulster face a tricky Zebre crossing next Sunday with what looks like an increasingly depleted team due to the Ulster contingent being asked to fill out the Irish team for a non meaningful fixture against Fiji.

The team is selected and looks well powered up front but a little steady and unspectacular at half back. There you have the fledgling Micheal Heaney replacing the unpredictable but dynamic Marshall and the aptly talented Mr. Pienaar.

Meanwhile, steady eddy Niall O’Connor replaces the youthful, pragmatic Paddy Jackson and the multi talented Mr. Pienaar. Ricky Andrew retains his place at full back after having a less than forthright debut against Edinburgh.

The coach is demonstrating that one ugly swallow doesn’t make a disaster and gives Mr. Andrew a chance at redemption as speedster Peter Nelson snaps at his heels in the selection stakes.

Beware of Zebre though, after an ignominious start to the league they are slowly getting to grips with the vicissitudes of PRO 12 and will provide Ulster’s ‘B’ team with a stern test.

Where it not for Ulster obtaining their maximum quota on the Ireland whatever XV for the game against Fiji, I would probably find something else to do than watch it. There are the usual quirky selections for this game and I’ve little to say, you’ll be glad to know, other than I hope the Ulster contingent have a good game.

Through The Keyhole – The Ravenhill Redevelopment 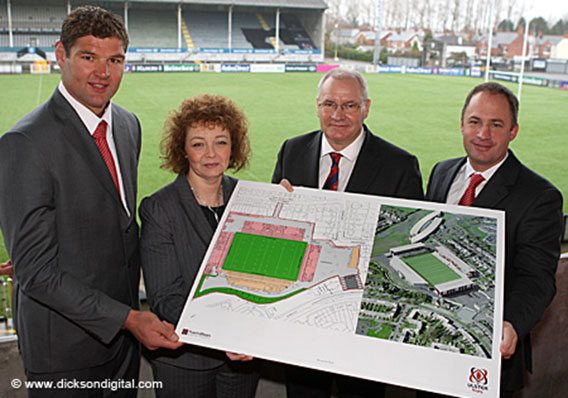 I half expected the Ravenhill redevelopment U-Toobe video to be a through the keyhole style virtual reality style walkabout Introduced by Lloyd Grossman and with a Phil Spector ‘wall of sound’ backing track.

The camera would pan through the massed ranks of yellow jacketed event sec, ordering, er directing people to their seats. Flags of various hues including one from outer Mongolia would be waving wildly and viewers would be presented with a maximum capacity stadium, with full length queues to the burger bars, to the bars and to the ladies toilets.

Then I woke up and smelt the coffee. There would be no Olympic opening ceremony reprise.

UR’s promotional video showed an almost celestial but deserted Ravenhill, bathed in an ethereal light and a freshly laundered pitch, with nary a shadow to disrupt the heavenly look. The stadia was so lathered in white it made John Lennon’s ‘Imagine’ video look dull.

Even the memorial arch had a pearly gate look to it. I half expected to see St Logie standing up there and a god like Lord Humph enthroned in the administrative offices were once stood a lowly beer tent.

Ulster supporters can now look forward to being transported to the sporting afterlife.

Brother Can You Spare a Dime?

Just time to ask if anyone out there has a spare ticket for the Terrace for the Ulster Leinster game on the 21st could they let me know.